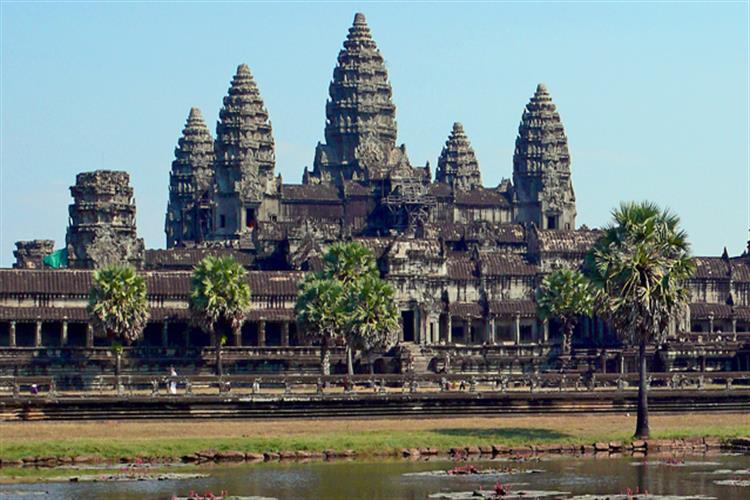 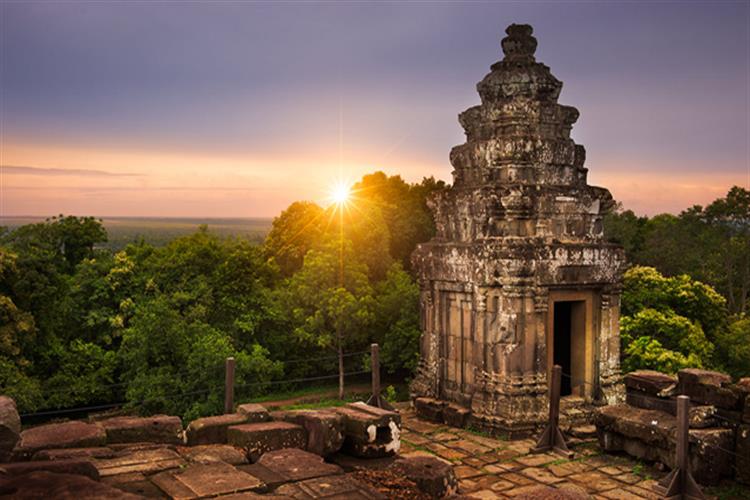 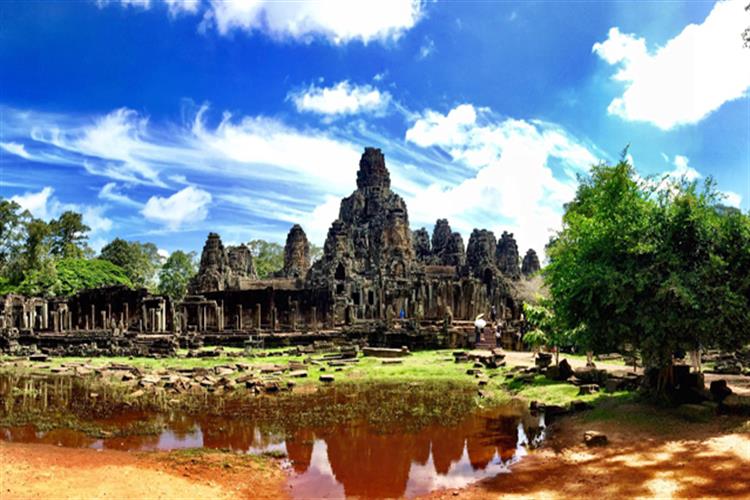 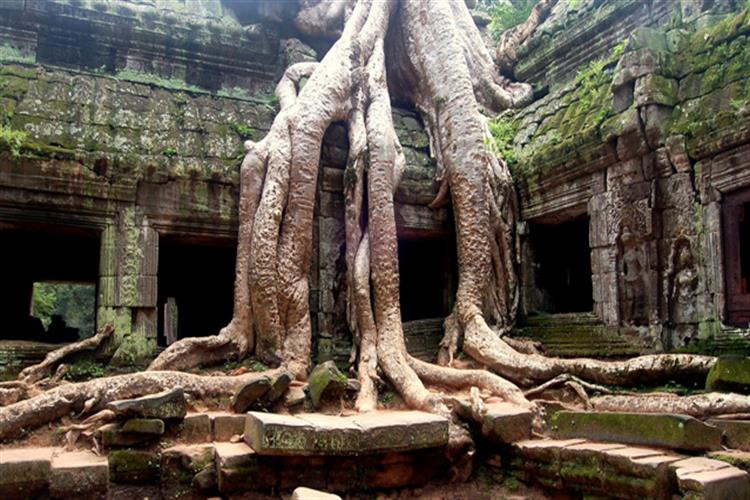 Your private tour of Angkor Wat will start at Bayon, which is called Angkor Thom, meaning “big city.” Your tour will take you to see the temple’s most famous and distinctive features, to include a multitude of incredible stone faces, which are sculpted into a large number of stone towers that jut out from the upper terrace and converge on the central peak.

Another beautiful sight is the Ta Prohm Ruins, which is simply amazing by any measure. This scene evolved out of the gigantic roots growing from the kapok and banyan trees that spread out over the stone ruins, breaking the walls and terraces apart from the intertwining of their branches, which actually form a roof made of leaves on top of the structures. There are massive tree trunks that twist and turn amongst a bunch of stone pillars.

Angkor Wat is breathtaking, both architecturally and artistically. There is no doubt that this is the most incredible religious monument and temple in the world, not to mention the largest. There are approximately 2,000 individually created Apsara carvings that adorn the walls of Angkor Wat, representing some of the most magnificent artistically done Apsara carvings that were ever created during the Angkorian era.

At the end of this full-day tour, you will find yourself climbing up the hill to Phnom Bakheng to witness an amazing sunset, since this temple is located at the very top. The view is utterly spectacular with the entire Angkor Wat Temple complex below.

As part of our Cambodia tour packages, the Grand Circle is the 2nd full-day tour option after the first day option, touring Angkor Wat.

Your private tour guide will greet you in the hotel lobby, ready to take you on another day’s tour. You will enjoy a tour of the Grand Circle Temple throughout the city of Siem Reap. This includes three temples: Preah Khan, then Neak Pean and at the end, Ta Som.

Preah Khan will be your first stop. This temple complex is enormous and where King Jayavarman VII lived temporarily at one point in time. Preah Khan was originally built to commemorate the King’s father.

After that you will move on to Neak Pean, a giant square-shaped pool surrounded by four other pools. In the center of the main pool there is an “island” displaying a huge carving of two naga serpents coiling.

The best time to visit Neak Pean is during the rainy season because that’s when the pools fill up with water. After Neak Pean you will continue on to visit Ta Som Temple, which is a tiny quiet Buddhist temple that features massive trees adorning its entrances, which provide an opportunity to take some spectacular pictures.

Included in this tour of the Grand Circle Temple, are a number of other nearby temples, like Pre Rub, Eastern Mebon and Srah Srang.

NOTE: If you are short on time and only have one day to spend on this tour option, you might want to ask if you can include Banteay Srei or “Citadel of the Women.” This appellation is very modern. Its beauty and all the intricate carvings never cease to amaze visitors. To add this site to your tour, just email us your request.

This is your 3rd full-day tour option with your private tour guide, after completing the 2nd full-day option where you toured Grand Circle.

Your Siem Reap tour guide will take you to see the Roluos Group along with other fascinating sites in this area.

First, you will see the Temple of Preah Ko, a funerary temple that houses the resting place of King Jayavarman II. There are six towers, which were all built on one single platform.

Preah Ko means “Sacred Bull” and the temple was given this name to recognize the three statues of bulls that surround the temple. Amazingly, the plasterwork on the towers is quite well preserved.

Next, you will move on to Lolei, where you will see Four Brick Towers built on a double laterite platform situated in the center of Lolei Baray. There are some lintel carvings featuring the distinctively delicate Preah Ko style for you to marvel at.

The final temple in this Group is Bakong. This will be the highlight of your day because it is the largest and without a doubt, the most interesting of the three. An ancient moat surrounds Bakong Temple, which was one of the first Angkorian temples designed using mountain architecture. From that point on, this design was used for hundreds of years.

After you’ve enjoyed lunch, your tour guide will show you some of the most interesting areas in Siem Reap. You’ll visit Tonle Sap Lake’s Floating Village. However, we recommend that you visit this site when the water level is high, which occurs from October to February and ask that you contact us if you need more information.

You will also visit the Psah Chas or Old Market French Quarter, Angkor Silk Farm, Cultural Village, the War Museum and other attractions. How many sites you visit depends on your choices and schedule.

* Please click the button below to read and and understand Angkor Code of Conduct.

* For the prices of tour arrangement, please click the button Tour Tarrif below. 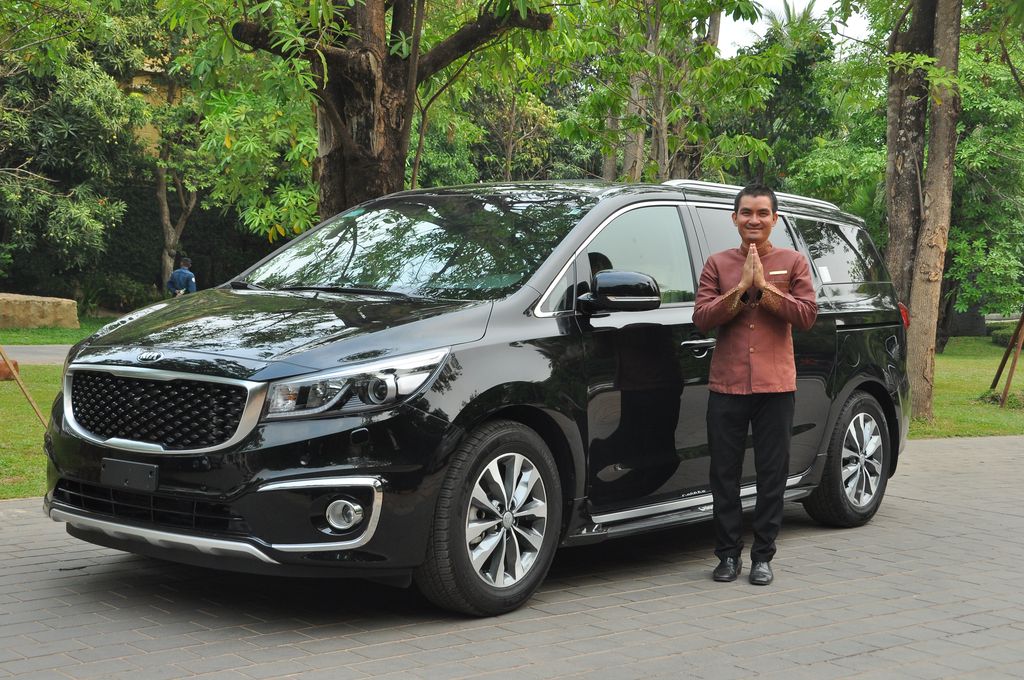 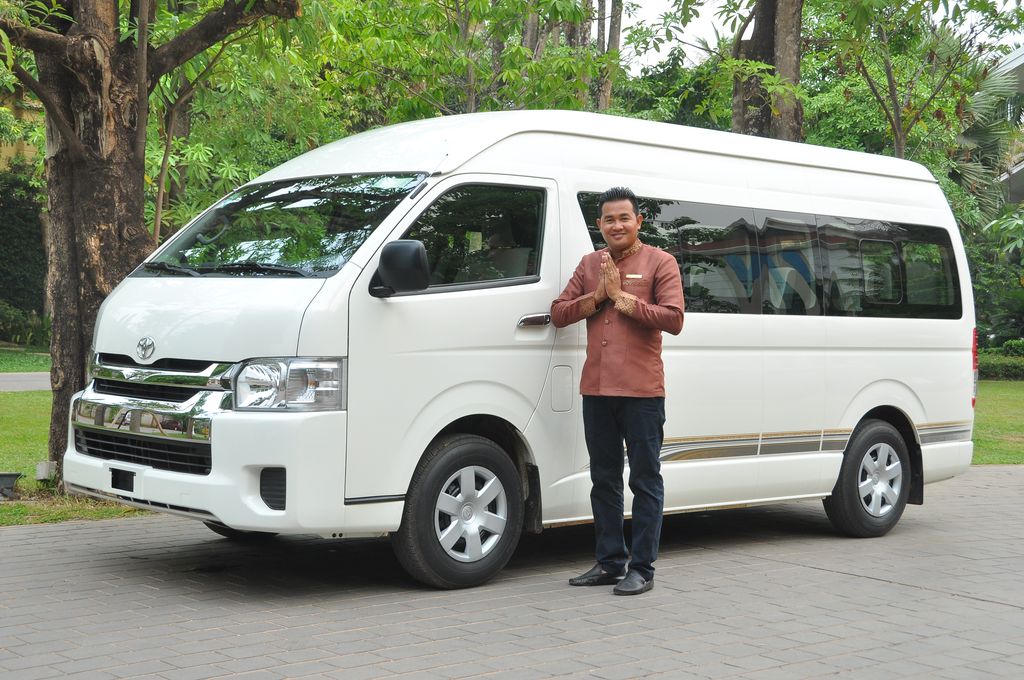 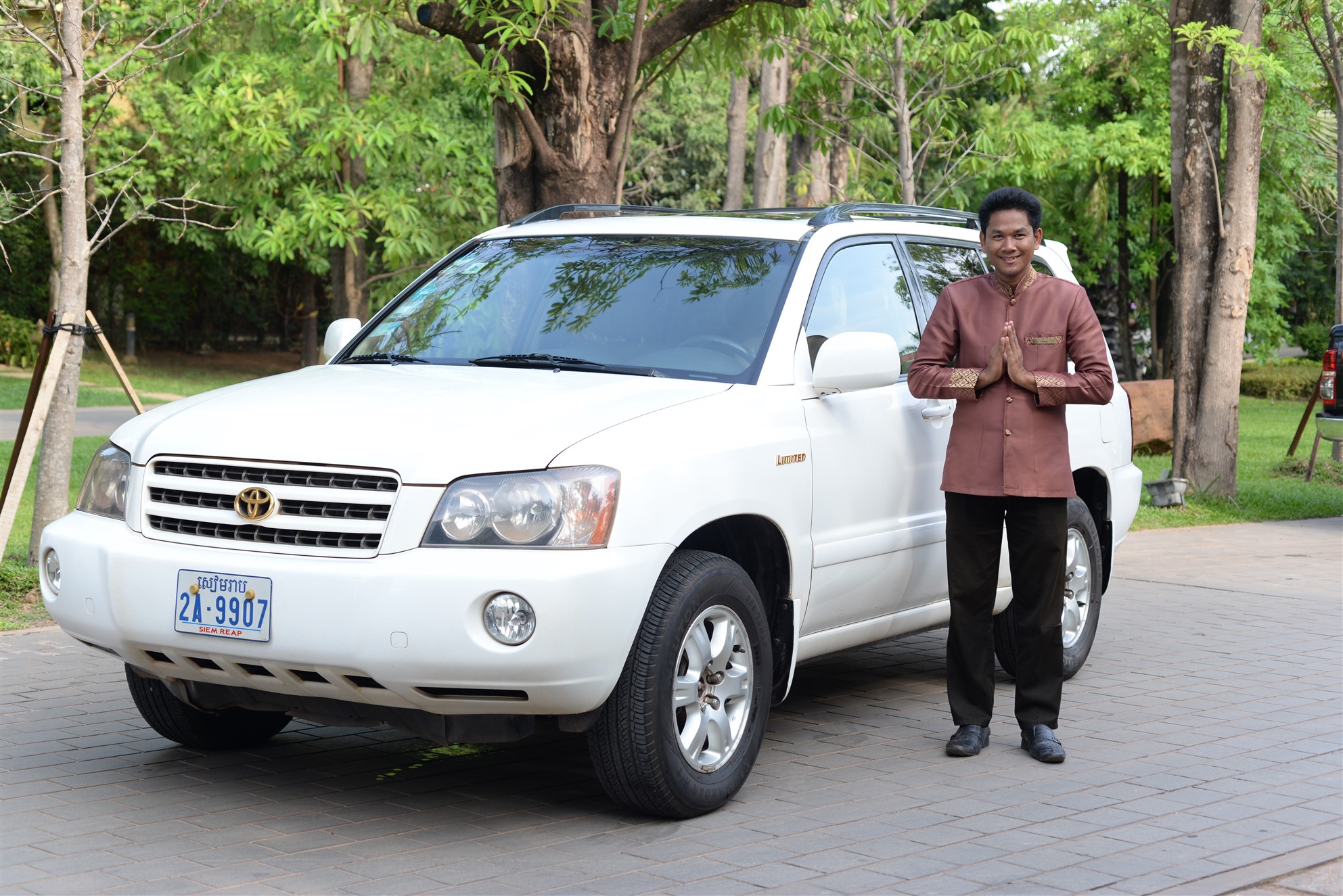 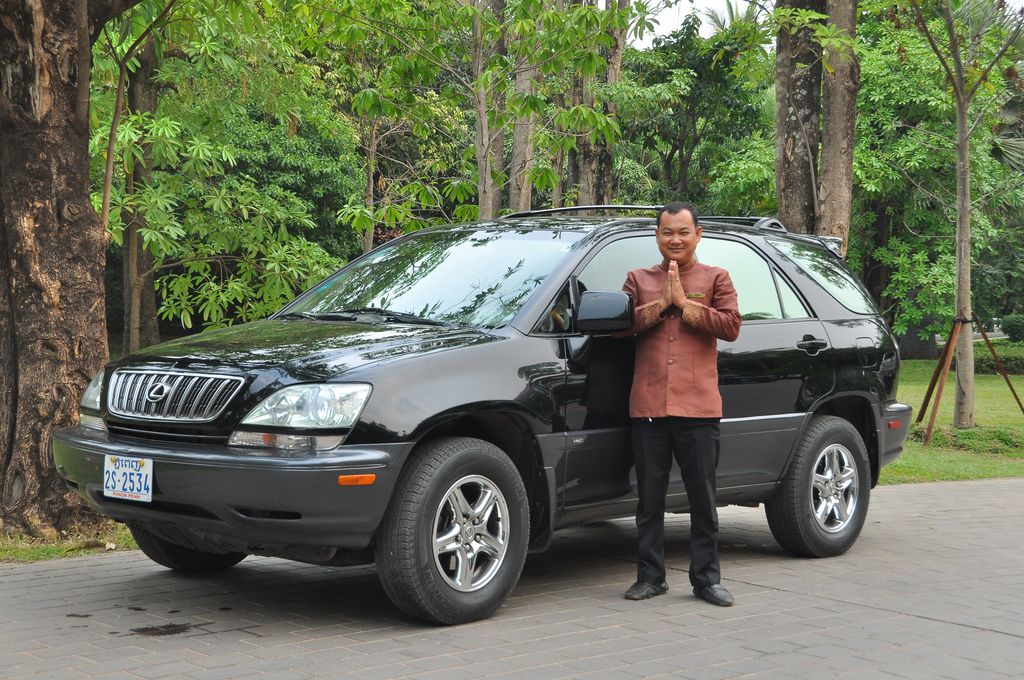 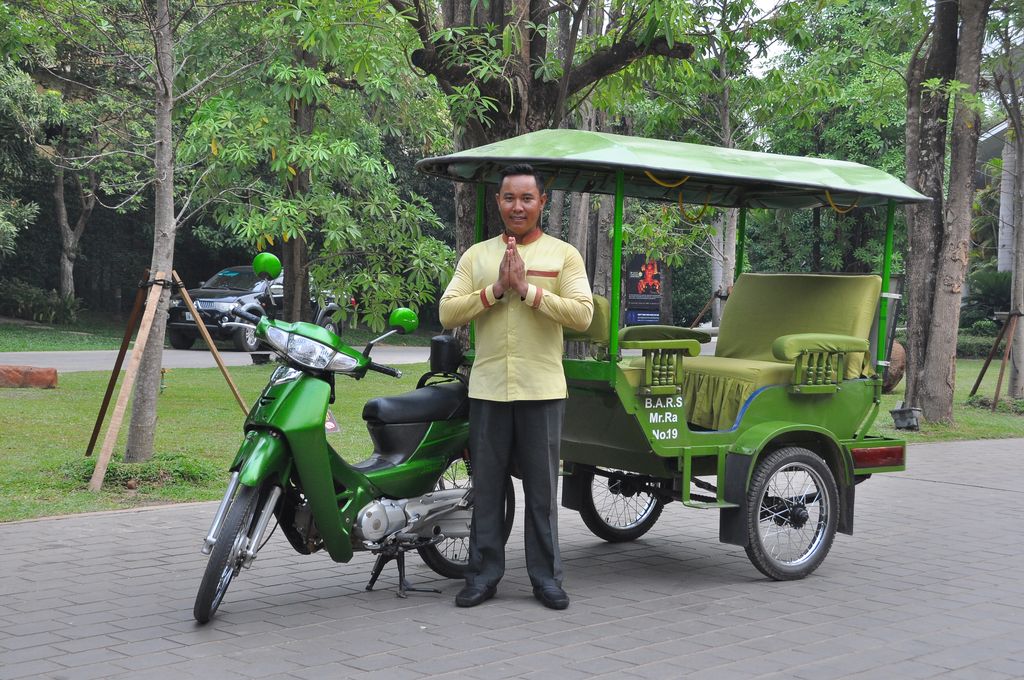 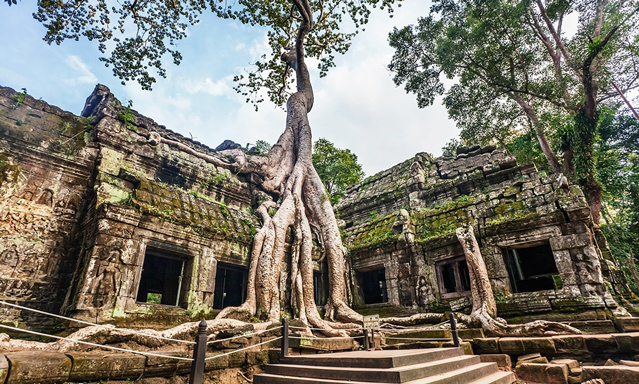 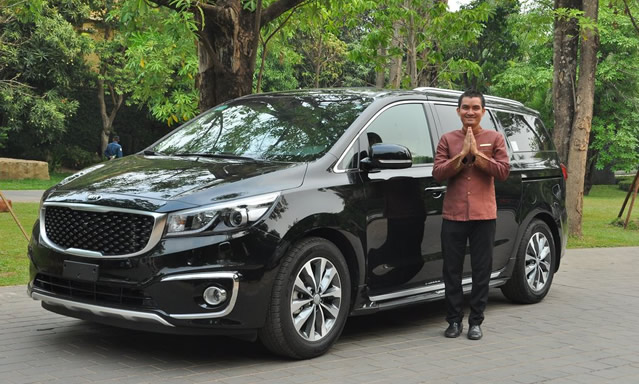 We are professional for ground handling service of tour transportation in Siem Reap, the Very Best of Destinations for a 2016 TripAdvisor Travelers Choice...